Gestures: one could argue that small gestures are always also big gestures since, in some way, all our actions are political. What do you think?

Yes, I would agree with what you just stated. I actually think that a lot of gestures gain magnitude along the way as they travel through different parts and groups of our society. When you look at a dance, for example, It is about movement, a form of non-verbal communication, an art form that is part of our culture forever. Even or especially for people who are not professionally trained as artists, dance can become a tool to express themselves. It inspired me to start the research: the numbness of the bodies that I was witnessing on the dancefloors in western Europe and the states. So I began to become interested in trying to understand what gets these bodies to move and what doesn’t.

Also, if we think about dance, it is essential to acknowledge the fact that dancing is being regulated socially and politically as well as by religion. We were taught what is the “right” way to dance, the right way to move. Dr Kelina Gotman, in her book “Choreomania: Dance and Disorder” goes more in-depth into restrictions of human body and ownership. She also explains that when political protest is read as epidemic madness, religious ecstasy as nervous disease, and angular dance moves as dark and uncouth, the ‘disorder’ being described is choreomania (dancing mania). Music that came from resistance, and that is also rave culture, allowed bodies to dance by breaking normative rules. Bodies got liberated.

For me dancing in itself is consisting of different kind of gestures (controlled ones or more spontaneous ones which I think are of more considerable significance). I am interested in dancefloors where “non-proper dances” are happening, where individuals are expressing themselves freely. These personal choreographies are the result of inner processes, personal trauma, of fear, personal references, frustrations as well as motivations and playfulness. There is reasoning in the way we move to express something. This is also where the political part steps in: When we mirror the behaviour of certain people in the club (which anyway means to unite something), we start synchronizing in a collective dance, which is very rewarding. That moment of synchronization is why we like to go out, because we want to feel as if we’re one, as being beyond oneself, being part of something bigger. Every dance floor has a context in which it is created. If there is a set of values that space is standing for and establishing or is trying to apply to people, then we can talk of a political dance. That is the difference between the clubs that have a governmental agency and others that don’t. So even small gestures that you practice at home alone, dancing, will have an impact on the way how you will be perceived from the outside and what you are translating.

This work: focuses on gestures in the club context. What did you learn about this? Is there a difference between clubs, area’s, moments in the night? Do light, colour, music influence the kind of gestures and in a way are part of the programming?

Yes, there certainly are differences. One could say that some clubs allow more expressive dances and some have more diverse dances while in other places people don’t move at all. For me, this numbness and non-movement are incredibly shocking, especially when you think that the bodies of the audience are exposed to audio-visual content, and they simply do not react to it. This is very alarming. What does it mean if a body doesn’t move? It basically indicates that one is detached from the moment, detached from themselves, separated from sensations and empathy, scarred, shy, limiting itself. Plus, when you think that people in clubs are in an altered state of consciousness and yet these bodies don’t move, it makes you wonder even more why that is. Of course, you could blame it on the music or the lighting, but it just means that these people are not in a place or an environment in which they can feel moved.

Again, it also has to do with the set of values that each space embodies. Every area is resonating the values of the people who are behind it. Entering a club or a party, it’s similar to entering somebody’s house, and you know very fast how to behave in that house, how things are organized, what’s allowed and what is not, how free you can move… So we are choreographed by the space, by the lighting and the sound. It should be there to embrace people, to hold them and challenge them, assisting them in going through individual experiences. Sadly most places only care about the economic success of a night. What used to be free culture, a culture of a free space got conquered by law regulations. Once this culture entered the economy model, it had different tasks and the more expensive cities got the more commercial it became. The role of a night mayor – a sort of overseer of a city’s night-time industries – is to negotiate between the city and night culture, but foremost the intention behind this post is pushing the economic value of such a culture.

Social codes: clubbing culture has its own. Somehow these spread internationally, and it’s essential with regards to notions of inclusivity too. In a way, unpredictability is part of that. How would you describe the tension between safety and crossing (normative) lines?

Here, the whole question of the perception of individualism and collectivism steps in. In my study of club culture I purposely use the bird’s eye view to see individuals as just one dot in this system of a lot of other dots. This perspective questions –– in a similar way that the internet does –– what does it mean to be one, what does it mean to be a group? This predictability of our behaviour is something that we’re being confronted with on the internet, but also it is something that comes out of a dancing crowd, the movements become extremely predictable –– and with it the trends, fashion and style. The bird’s eye view we use every day when we’re using Google Maps or when we’re waiting for an Uber ride etc. We are presented as dots through technology. This perspective used to belong to God, the divine perspective. Only God could see us all.

In this whole discourse, we are often talking about the values that the club Berghain has established which is this idea of sexual liberation, of curating a crowd through a door policy, of being a place for specific diversity, even though what you witness with Berghain is more some kind of uniformity. I guess this place, the club needs to reinvent itself and that is not an easy tasks when you have to stay full and open from Friday till Monday. What is interesting is that this place became a room to obey, a temple for worshipping. It’s very ritualistic. I connect the term “safe space” to the magic circle. The rules inside of the ring do not apply outside and the other way around. I think the whole world “safe space”, for me, is very much linked to us being able to try out different identities and different expressions. It’s interesting because you can easily define the places where it is only about ego and differ them from others that allow vulnerability and embrace that. We live in times where we need to stress the importance of safe spaces. But it’s also interesting to ask yourself at what point these places became not safe. By looking at the dance floor you could already see that right-wing populism is happening and that it will grow, you could already see that there are no women on the dance floor but mostly men, that queer community does not have a space, that gay parties are just focused on self-pleasure, the dance floors are not really welcome to everybody, to every skin colour, ethnicity, class etc.. This question of who participates and who doesn’t is very important here. This kind of absence of inclusivity in spaces and disappearance of queer spaces created clubs like Berghain and many others followed. What we see in the Netherlands, especially with parties that young people are doing, is that they are very conscious about the importance of inclusivity and rethinking of values. They are trying to create an opposite to the mainstream.

Clubbing: what is the value in the current sociopolitical moment?

Political dance was something that I was introduced to at a very early age. We were dancing in Belgrade during the NATO bombing. Dancing not only as a means of mocking potential death but also as a survival mechanism, of being together and being united. After experiencing that and coming to the Netherlands, I was shocked by the zero sense of urgency it had here. Dance floors were much more about mating, about hooking up, this moment during the weekend as an award for hard-working hours. And there were a lot of regulations as a reaction to the extreme 90s.

I realized that I was looking for the last dance. A dance that today I would call the “Dance Of Urgency”, which is a dance that arises in personal and collective crisis and which aims to empower groups as well as individuals. I started to search for these dance floors, where the urgency is present, and through this I came in contact with people from Georgia, Ukraine, Brazil and came to notice that in these cultures politics and dance floors are very much connected with each other.

We, Liese Kingma and I, managed to bring these people together. We started Frei(t)räume and since four years we meet yearly in Berlin at a conference where we discuss club culture. What in the beginning felt like an exotic narrative from far away, now is actually a narrative that is very present in Western Europe. A week after the revolution in Georgia, where people danced in front of the parliament for two days *, there were anti-fascist protests in Berlin that gathered 85.000 people on the street. Theses protests had been organized by the Reclaim Club Culture. Many clubs, festivals, collectives, and partygoers joined in these protests. I think it was because of what happened in Georgia the movement became more visible. In a way the Georgians made clear to us what it means to dance together in urgency and for a cause. There are many parties out there, they all look the same but don’t feel the same. Most of them are nationalist and with a set of values that I disagree with. Reclaiming of the dance floor is what we are experiencing.

*The film in Bogomir Doringer’s exhibition ‘Dancing Defence: Space, Ritual, Gesture’, about Naja Orashvili who is one of the founders of the Club Bassiani, elaborates on this. 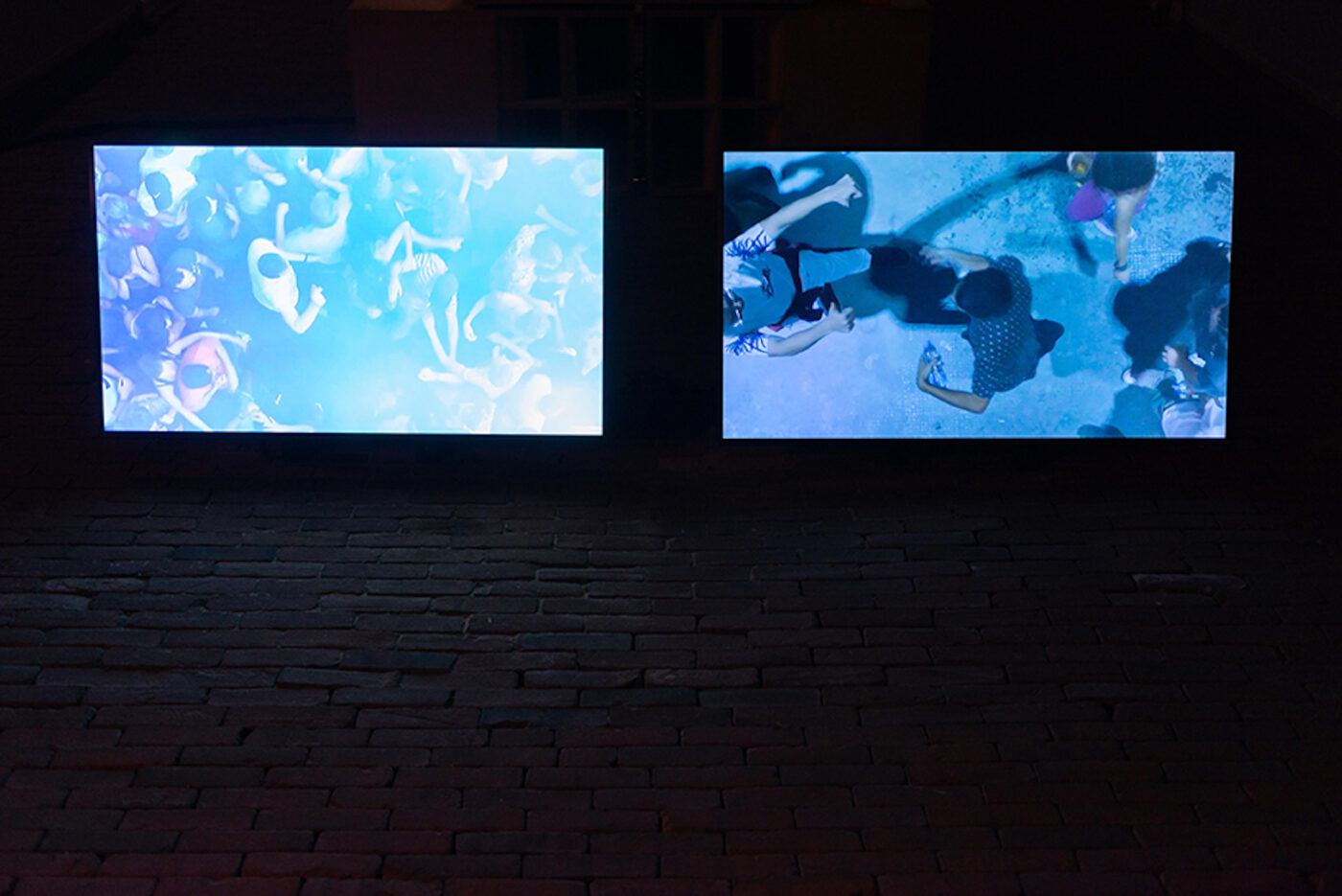