The artist Nicola Arthen (1990) ex­plores the re­la­tion­ship be­tween hu­mans and ma­chines through instal­la­tion, video and sculp­ture, thereby fo­cusing on the im­pact of technological in­no­va­tions and the ide­olo­gies at their core. Earlier this year his solo show Eagle & Hesitant Vehicles opened at Kunstfort bij Vijfhuizen. In this short conversation, we look both to the past and the future, as he sets out for London, pursuing an MFA at Goldsmiths.

Looking back on the show, how has life and your practice been since?

“I know where I will be for the upcoming two years or so, studying in London. This hasn’t happened in a while and so somehow after the show I allowed myself to be a little bit blank. I am now earning money as an assistant to an artist before I dive back into my practice full-time in September.

Since the show was on short notice, it came together with works and thoughts I had been working on for some time already. I had worked with a wind-machine at my show at puntWG back in 2017 and also shown a ventilator in a residency in Guadalajara, Mexico last year. I was trying to simulate a climate on the inside, create a surrogate for the weather. And there the works had a very strong and industrial presence. At the Kunstfort I allowed myself to work more delicately. The ventilators were barely turning and made very little wind. I wanted to create more a feeling of comfort, focusing on the atmosphere in the space.”

Is this something you allow yourself more often, to rework something once it’s been shown?

“I would love to feel like it’s always an option. To take a work and change it. But then I also feel like a work is out of your hands the very instant you give it a title. In the video, I showed at the Kunstfort, you can see a drone slowly tracking through the street of Amsterdam and then making a turn inside a house. It ends with the drone being completely submerged by a light bulb. The ending does feel a bit unresolved. I feel like it is suggesting something, and I don’t quite know what. It finishes on what I like to call a mosquito trap. And maybe since the drone is a flying object it makes sense to have it be trapped.

I ran a few tests beforehand, and in one of them the drone flies up to my girlfriend who in that moment is really surprised by it and then playfully takes a little puppet and interacts with the drone as though it were an animal. And this is much closer to the effect I was wishing for, where someone doesn’t know what kind of being it is. In another test the neighbour flew a drone at the same time and since it was in the backyard, we didn’t know where it came from. I was quite intimidated as I didn’t know whether it was filming or not. These feelings around technology is what I am curious about.”

A sense of not knowing what to do, or how to feel about something?

“When I started out I felt as an artist you make critical work. That was supposedly the thing you do. Make revealing, iconic images that engage with the world in a critical way. Now I feel much more comfortable simply observing and not engaging in clear-cut judgment. Explore the feeling of not knowing much.

I also try to work more directly with things that can be experienced physically and almost comfort a viewer. Creating experience-like work, although that term does border on things I don’t much care for like amusement parks. Recently, I’ve been playing with the idea of showing work outside, unannounced. I made a work previously in the Amstelpark for an exhibition outside. There was only a loose floorplan and so people could only half know where it was located. The work was made of wood and had a precise shape which over time became fuzzy as fungi and other things grew on top of it. It was just rotting. I like the idea of making it unclear where the work starts and where it intermingles with everyday life rather than it belonging exclusively to an art space.”

Is it about expanding the art space then, or working wholly outside of it?

“In the first place the intention is to work outside of it. Walking and cycling around a city my own gaze is always fixating on chance constellations. Things that weren’t intended for presentation the way I might observe them at that moment. There is a quality there that I would like to follow up on. Though I can imagine it can get very unsatisfying as an artist to never see or hear a viewer noticing such unannounced work. And when you remove yourself from the context of an art space, there is also a gap to fill since the art space provides a stronger feeling of (professional) relevance.”

The title of the show and your use of drones shows you have quite a fondness for flying over things and people. How come?

“Well, it’s always impressive when you fly on a plane and look down, no? It’s the closest suggestion to having an overview and being outside of the world for a second. It’s also very tempting to take on that perspective. Although, in the past few years it has been impossible to fly without having a bad conscience. So, clearly “being outside of it” only reaches so far. But this view of the world can change our awareness. There is a documentary called Overview made in 2012, where they discuss the overview effect, which is a cognitive shift in awareness as reported by astronauts. When having seen the world from above, they all of a sudden feel the urge to found charities, engage in NGO’s and strive for a general betterment of the world.”

So perhaps in order to save the world we should all make one flight in our life, up to the stars and back again.

“Maybe. But there must be a better way to make us understand what is currently at stake.”

Is this feeling of wonder by being up in the air also the reason for the suspension of the yellow beams?

“Not really. I wanted to maintain the visual integrity of the uneven floor at Kunstfort’s metal shed and also disliked the placement of pedestals, which often clash with that space. So, I suspended everything. The yellow beams are something I adapted from the existing architecture of the space, to give it a common language. The piece shown on these beams come from my interest in the self-driving car and our collective wish to give things up to a machine, be it through a phone or otherwise. What do you make with the idea of gaining time by not having to drive? What does that time give you: more work or leisure?

Usually when an object reaches a certain state of perfection in their shape and general glossiness there comes a countermovement of making it look broken or damaged. It’s the whole idea behind shabby chic. And so I was playing around with the idea of this happening to cars, where you wouldn’t think of them as scratch-free objects, but rather it being possible of them being splintered into fragments. The thought also came about because someone asked me whether a self-driving car would crash differently than a car driven by a human would. Perhaps the automation of the self-driving car takes place in the way a car can explode into different pieces? So I made a digital car body and let an algorithm slice through the car and it produced these weird slices. I milled the digital files into a wooden mould, and then laminated carbon fibre upon it which is a fabric and used for cars.”

So much thought, and yet you would never guess just by looking at the work.

“Yes. All of this gets lost whenever I show the piece. Still, I’ve never shown it with a text. Even though I love talking about my work, I have a resistance against delivering like that beforehand because I fear the way people will read the text guides them either to confirm or disagree with the stated intentions. This doesn’t leave enough space for interpretation. Semantically supporting the practice should come after the viewing, not before. But I’m still grappling with it, so bear with me for a while.” 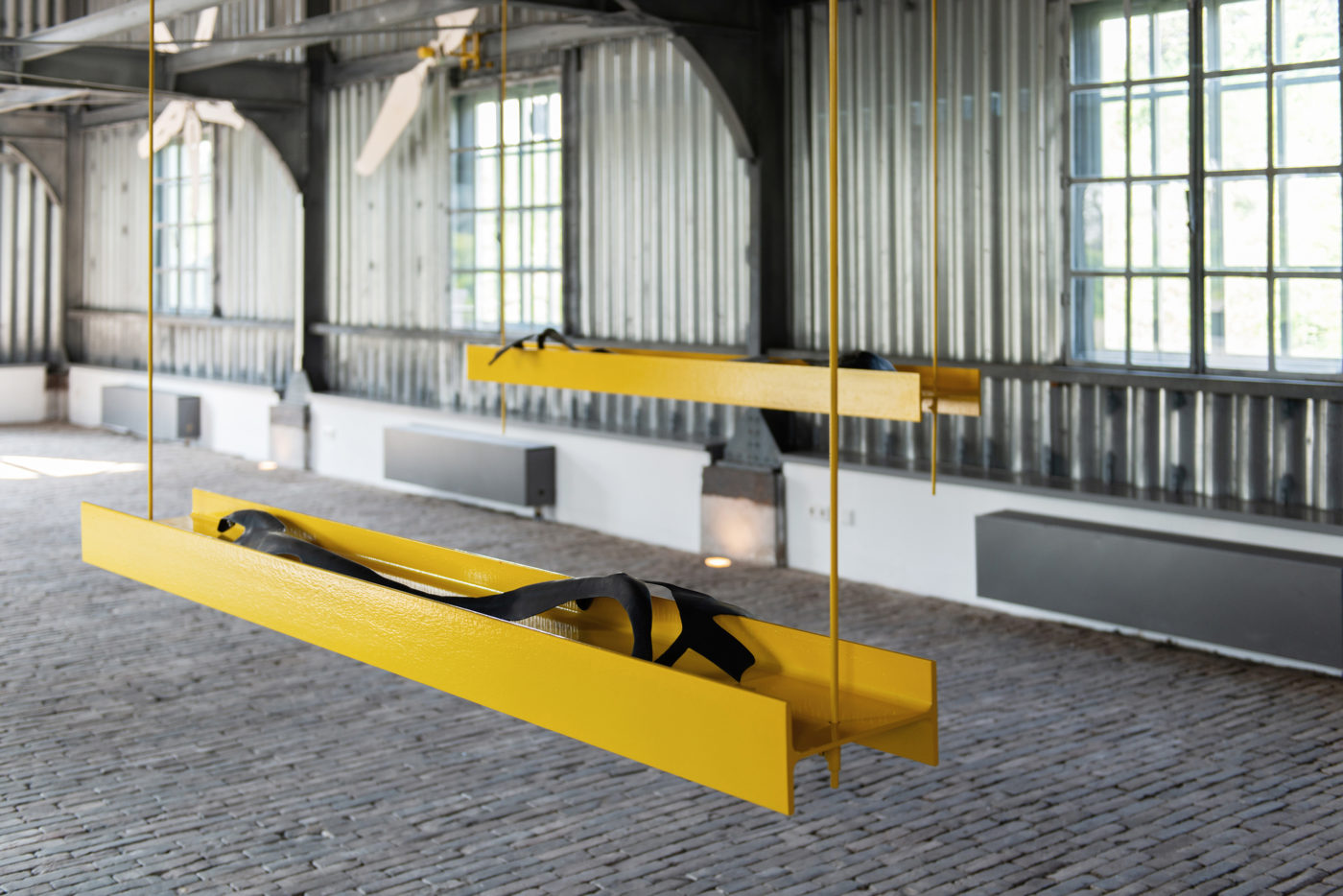 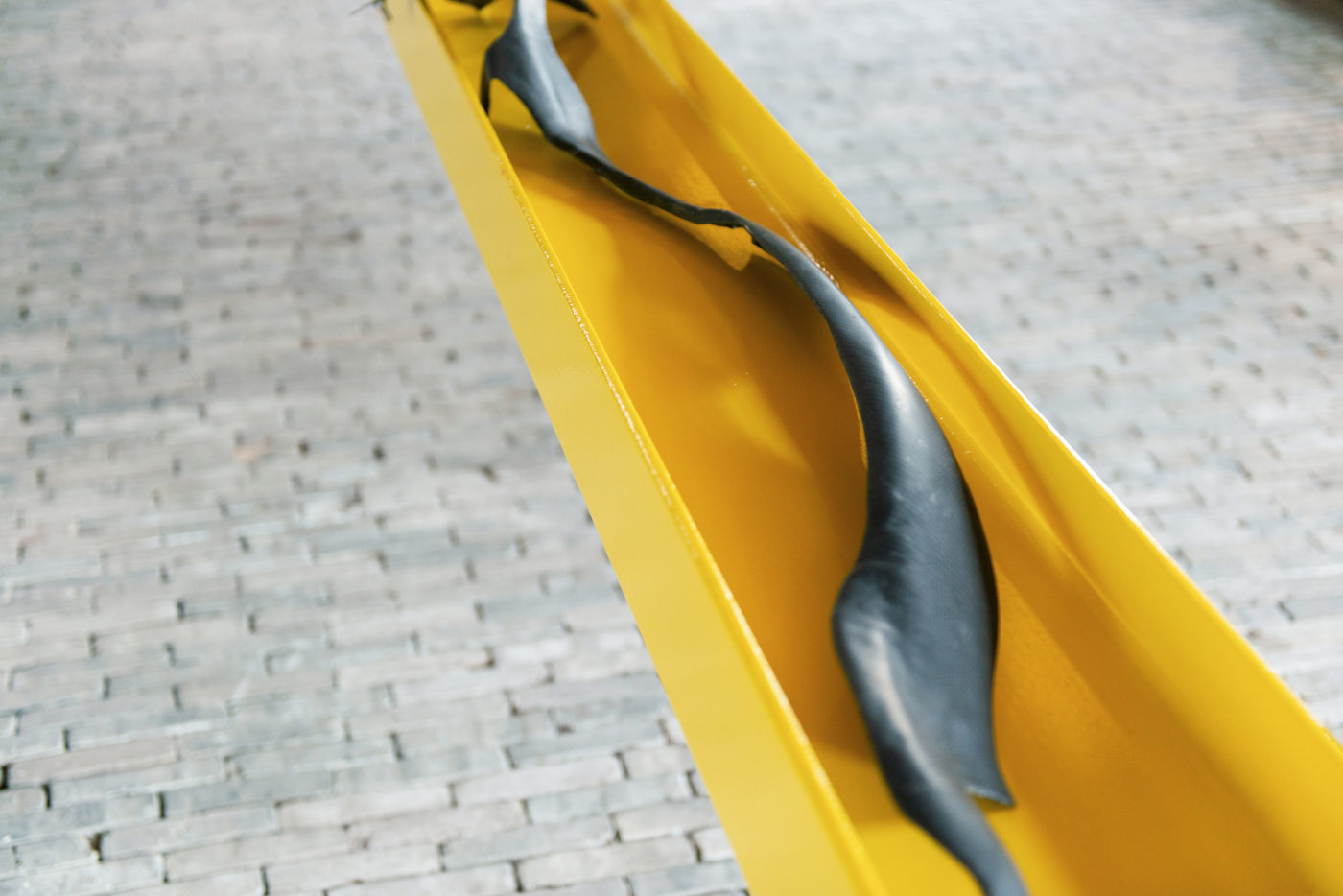 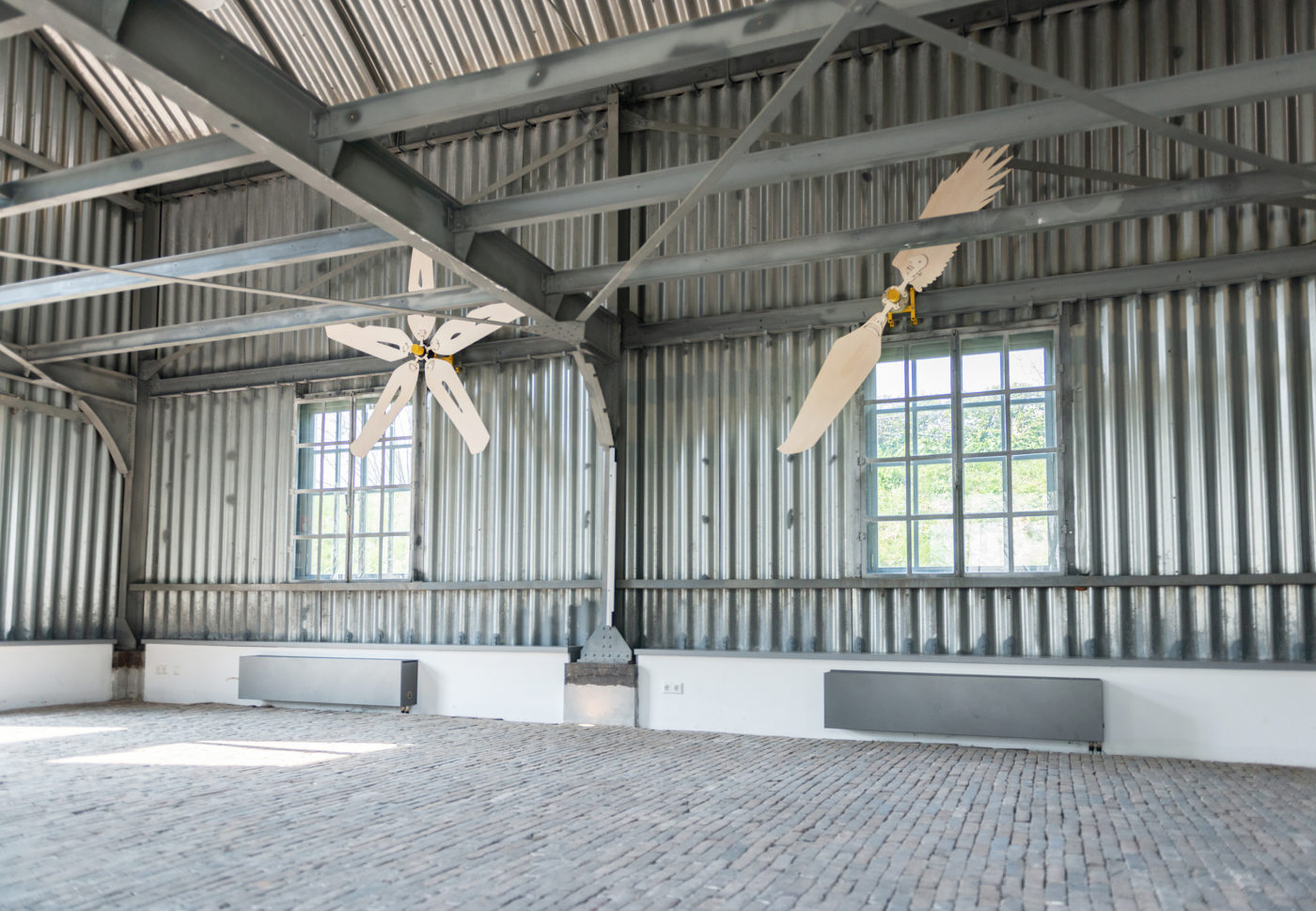 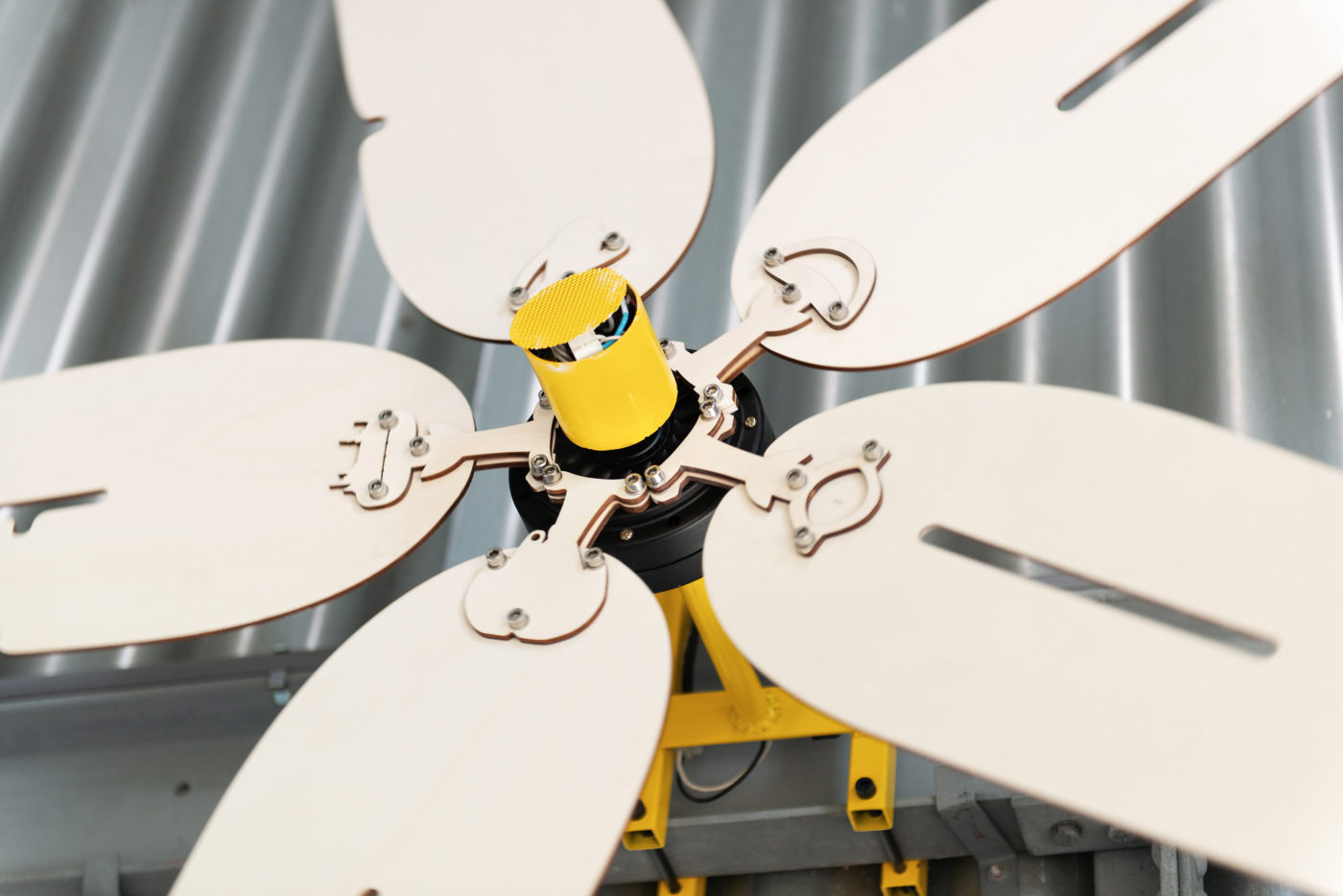 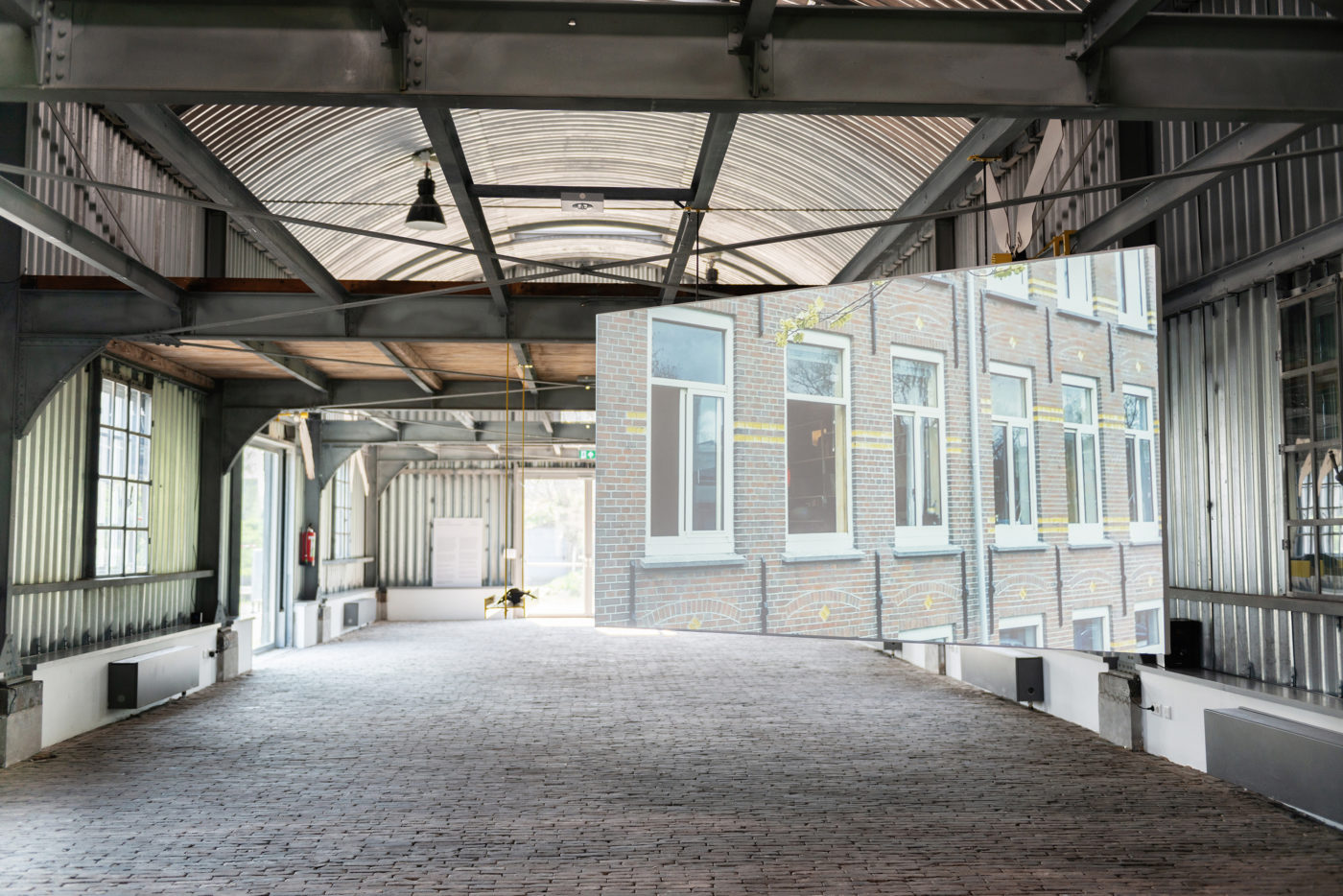