Since July 2016 Zippora Elders has been the artistic director (now director) of Kunstfort bij Vijfhuizen. In recent years she has initiated a line of programming dealing with science fiction. Together with writer Alix de Massiac, she looks back on these last years at the Kunstfort.

Can you tell me a little bit about your education and activities before you became artistic director at the Kunstfort?

Previously, I worked as a curator at Foam in Amsterdam. In addition to overseeing large solo and group exhibitions, I was part of the editorial staff of Foam Magazine, for which I also wrote frequently. As a freelancer I worked for the Sandberg Institute, among others, and before that I was a curator in training at the Stedelijk Museum Amsterdam. I studied art history and heritage and museum studies, with a special focus on curating, and did an extracurricular course in philosophy at the University of Amsterdam, as well as public administration at the University of Leiden.

What did you find when you started at the Kunstfort three years ago?

Before I arrived here, the Kunstfort had been without a director for a year. For the most part, the day-to-day management was the responsibility of the board. Temporary curator Julia Geerlings had been making group exhibitions, which followed the programme of the previous director, Holger Nickisch. Holger saw the Kunstfort as a place where forgotten outdoor artworks could find a home. His vision was inspired, among other things, by theories about the function and design of public space. This fits well with the Haarlemmermeer, an area of relatively recently reclaimed land that is completely man-made. I see the Kunstfort as a platform for artists and designers, and therefore wanted the programme to focus more on solo exhibitions in combination with interventions by individuals. When I started, there was still a bit of a struggle to sort things out, because it had just undergone a reorganization. Shortly after I took the position, the foundation was split in two; one foundation for the management and conservation of the Kunstfort as heritage site and the other for the cultural programming of Fort Vijfhuizen. As a result, I also assumed the general directorship and we worked with a new team. In such a complex organization it is important to have a good division of labour and allow space for developing your institute as a business enterprise. Since then, I’ve invested in making the team a bit larger and more diverse.

Do you feel you’ve developed in those three years and more?

It’s a unique and honourable opportunity to be the director of an atypical space for contemporary art, outside the urban centres. You need to think carefully about what you stand for as an institution and what position you occupy, both locally and in the broader cultural field. I’ve learned to be simultaneously a director and a curator. Of course the administrative and legal aspects of my job are crucial and indispensable, but it’s also a challenge in an organization like the Kunstfort; as director, you need to fill many different roles. You must constantly balance between being the organization’s public face and the primary point of contact within it. In a short period I learned a lot about interpersonal relationships, and myself…

I guess leadership has always been a sort of trait of mine. I can produce, coordinate and manage, but the artistic aspect of my job is crucial and I find it very important to allow space and time for that. Curators are often expected to be almost formal in their professionalism, while it is precisely their strength to think in an ‘alternative’ way, and this sometimes asks for a different pace. A balance needs to be found in this. As a team we are now well attuned to each other.

You have defined clear, overarching themes in your programme. What are these and how did they come about?

Fort Vijfhuizen is part of the Defence Line of Amsterdam and carries a strong military connotation. Located in the Haarlemmermeer, the predecessor of the Flevopolder, it’s an important cultural and historical site. This fact always plays a central role in the programming. Because the fort is not only a heritage site but also a lively, creative place, its history and meaning remain topical and shift with our changing reality.

Since 2016, we’ve made science fiction a thematic focus. While working with artists, it soon became clear that certain subjects kept coming up intuitively. I’ve searched for the common denominator between these subjects and the Kunstfort itself. It’s a place that evokes engagement and action. In the end, I found that everything comes together with science fiction. Moreover, it offers the opportunity to approach the programming in a multi- and interdisciplinary way, and it’s an interesting starting point to explain how to approach art to a wider audience. Art dares and encourages you to dream. It is a way to shape the imagination and form ideas about other possible realities.

The ecological aspect of the programming is also relevant, because the Kunstfort’s surroundings are so distinctly planned and set out. Almost unconsciously, you begin to reflect on the landscape and our position within it. This is particularly emphasized in the Kunstfort Projects – Bee Heroes, where we connect discussions about ecology and responsibility.

The popularity of science fiction has increased enormously in recent years. Were you following this trend or do you consider yourself a forerunner?

When we began to thematically integrate this in the programming, I believe it was not yet so widely apparent. But I had the idea that science fiction would be a good starting point to approach the current issues that the history of the fort entails, such as border politics and migration, but also working and living together with that which is (still) unknown to us. I think that science fiction, as a genre, invites the viewer to dive into their own imagination, to think differently, and that is exactly what I want to achieve at the Kunstfort.

At Foam, I worked a lot with similar themes in photography, such as artificiality in nature, in relation to the different perspectives artists have when it comes to the Post-Anthropocene, but also in the visualization of objects as artefacts. Before that, I had assisted with the Kazimir Malevich retrospective at the Stedelijk Museum Amsterdam. Malevich belonged to the Russian avant-garde and had a strong belief in the future. In times of confusion and fears that ‘the world is ending’, you see that artists more frequently turn to alternative futures. Yet science fiction allows creative space through which art can confront the abuses of the here and now.

Perhaps I still feel like an alien, too. In general as an ‘art person’, but also here at the Kunstfort. Living and working in this flat land, the typical polder mentality that you encounter as a manager of such an institute, and having to navigate in a world that is led by people who look different than I do. The Kunstfort makes me happy and curious. Since I started here, I have been trying to make the organization more fluid. This process was of course already started before I arrived, but in my opinion you can never have enough adventure, magic and colour. I’m not only a critical but also an optimistic alien [laughs].

Given your previous experience at Foam and the Stedelijk, wasn’t it a considerable transition from white cube to the Kunstfort?

Yes, it did take some getting used to in the beginning. Things do not always turn out the way you thought they would. Both from a practical and a conceptual standpoint, it requires a completely different approach to exhibition-making. That’s something you must learn, but I hope to have mastered it by now. By keeping ourselves closely involved in the exhibitions, we got acquainted with the space as a team: what works and what doesn’t, how people move through the space, etc. Then there are all kinds of technical aspects that we have recently worked on, which greatly improved the stability of the space. I also removed a number of things that caused visual noise and changed the light into white (day)light. These seem to be minor adjustments that as a medium sized institution you must consciously set aside money for, but they have an effect on the general feeling of the space, both for the artist and the visitor.

The Kunstfort is a cultural institution on the periphery. How do you attract your audience?

One of the first things I did was sharpen our visual identity. We asked a designer, Dan Solbach, to create our website and graphic design. He hadn’t designed anything in the Netherlands before, but did have experience working for many art institutions abroad. His design has an international aesthetic, but remains accessible to both a regional and heritage audience. In addition, I started to focus more on the individual artist’s position, simply by asking them what they needed. By presenting ourselves foremost as a platform for artists and designers, we automatically started to attract a professional art audience.

Furthermore, we have set up an annual programme that focuses on the region and creative skills, which last year, for example, was put together in collaboration with artist Bruno Zhu. Haarlemmermeer is a specific region in which the municipality seeks a more intimate connection with its residents. I’m in close contact with the cultural administrators of Haarlemmermeer and Haarlem, and keep myself up to date about ongoing discussions. Our annual residency, Kunstfort Kasus, connects international art discourse with craftmanship, location and the (planned) surroundings.

And where do we stand now? What does the future of the Kunstfort look like? And your own?

Because the organizational side of my job required a lot of attention the last couple of years, I was less able to focus on further investigating the running themes in our programme. I intend to spend more time in the future on the content, involving even more artists and cultural workers as well. I see it as our responsibility to seek connections with others and to encourage polyphony. Keeping up this international exchange is important for the region as well.

Since the end of 2019 we have continued to focus on the programmatic trajectory of ‘enchantment, healing and fertility’ while still operating within the context of alternative realities. We reflect on the static architecture of the fort and the many stories it holds. We want to strengthen local and international communities, and we hope to artistically inspire body and mind through nature and art. I also think it’s important to promote the island on which the fort is located as an open house for creativity, especially with regard to the aging population and the isolation of people living alone. This comes from our many years of experience working with volunteers. Unanimity and really working together is essential, in both a visual and conceptual sense. The bees on the island are a nice example of this.

We will consolidate our themes and make further in-depth explorations. The Mondriaan Fund’s support over the years has given us the opportunity to do this. The online journal, for example, is a way to look for nuances in subjects and topics raised by the artists and exhibitions, but also to give ideas a lasting presence. Until now, for the most part, the artistic content came from me. This was helpful in putting the Kunstfort more on the map with a cultural budget, but over the long term I think that’s limited in vision. The next chapter is differentiation. 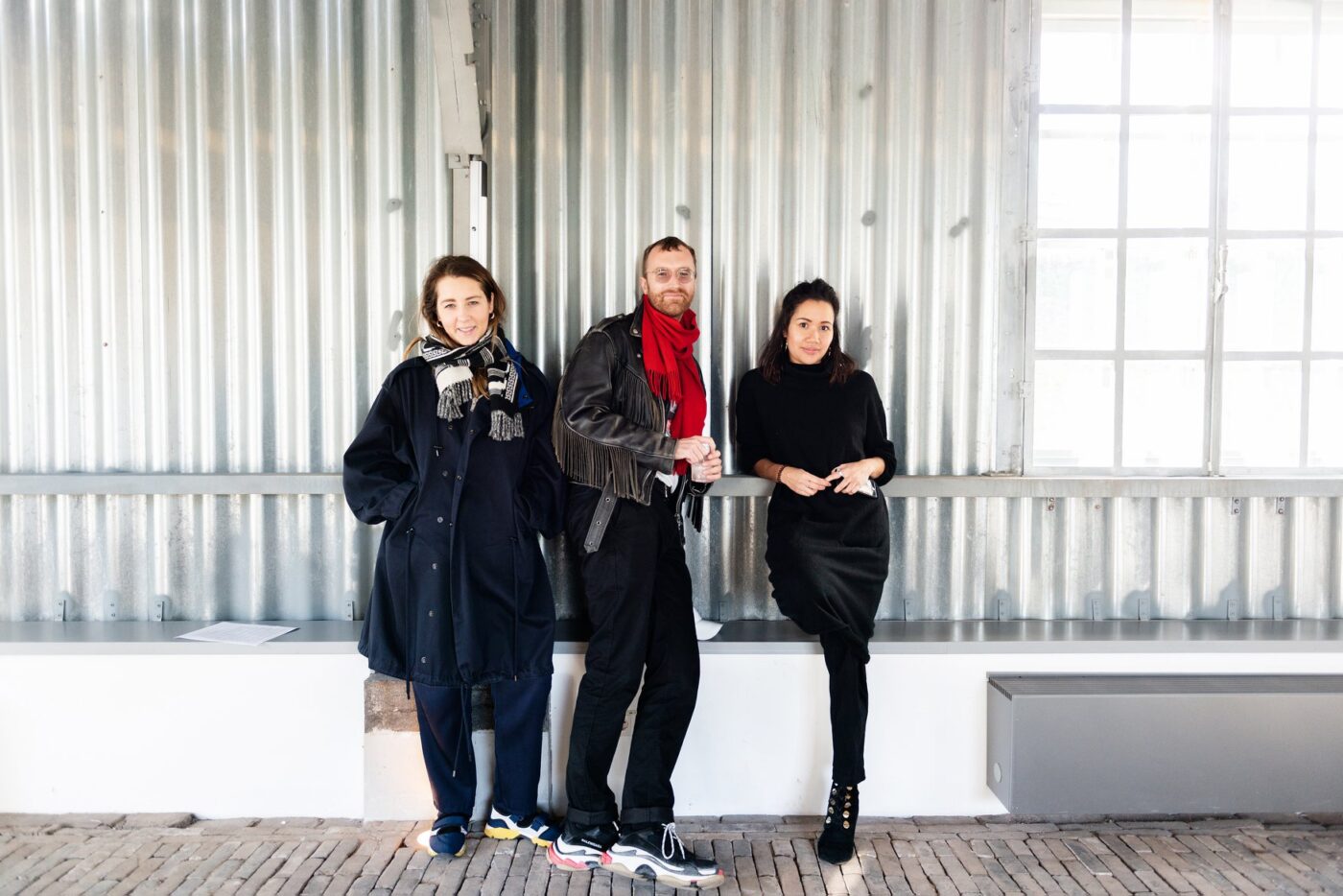